Every foreign cruiser I have met in Japan has said that the No. 1 attraction of cruising Japan is the people. They are friendly, courteous, and helpful.

Omotenashi is a Japanese word that is often translated as "hospitality," but it is much more than that. It is a multilayered term that includes both pride in, and responsibility for, taking care of guests (not just "visitors"), putting the guest before self, and anticipating (and responding to) a guest's needs.

And beyond the person-to-person interactions, the omotenashi spirit is also reflected in Japanese businesses' commitment to superior customer service, to going above-and-beyond to satisfy a customer. So, as a cruiser, you will experience omotenashi when pulling into a marina, when having boat repair/maintenance jobs done, and when getting fuel delivered to your boat by the local gas station.

Here are a few of my omotenashi experiences from six years of cruising Japan. 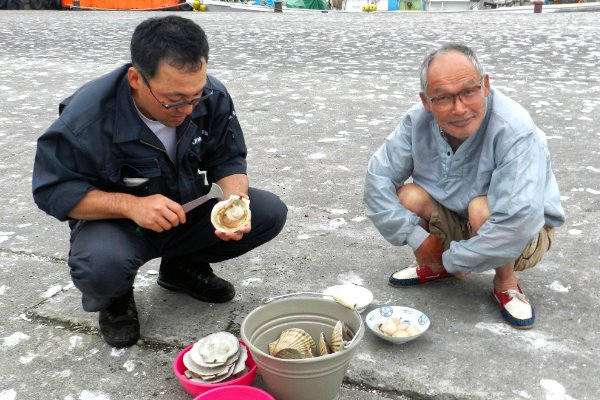 After a trans-Pacific crossing, I cleared in at Hakodate and then started a circumnavigation of the northern island of Hokkaido. At my first stop, the small fishing port of Matsumae, I met Sasa-san, who was also planning to go around Hokkaido on his 28' motor sailer.

Perhaps feeling sorry for me and my ignorance of the unique aspects of cruising Japan, he took me under his wing for six weeks. He taught me how to pick out mooring spots in fishing ports, how to side-tie to the high concrete walls, how to differentiate between dangerous and benign fishing nets, and much more. He often pulled in to a port ahead of me to scout out the moorage options and he often helped me push off in the morning.

This photo is of Sasa-san (right) with a member of the Hamaonishibetsu Fishing Co-op, who was shucking freshly harvested scallops for us – in the end, we both got several big bags of scallops that we feasted on, breakfast and dinner, for a week. 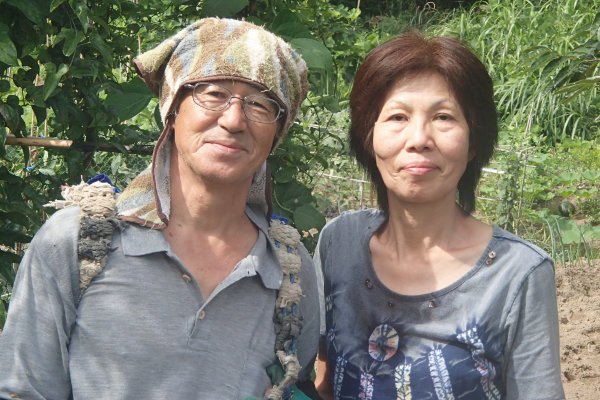 Looking for a Bath

Going south along the Sea of Japan (my personal favourite Japanese cruising area), I pulled into the small port of Oga, Akita. In its day, Oga was a thriving fishing village and a popular destination for tourists attracted by its once-lovely beach. But now it is a classic example of the demise of rural Japan, with a shrinking birthrate and a mass exodus to the city leaving places like Oga on the brink of extinction.

As I walked along the crumbling beach boardwalk, I met a woman walking her dog and so I asked if there was an onsen (hot spring bath) or sento (public bath) in town. She told me that there used to be many but that they all closed because of the lack of customers, and then she asked me why I was looking for a bath. I pointed to my sailboat moored in the fishing port and told her that I was staying the night and so hoped to have a bath, but that it was not a problem. Returning to my boat, I saw a car parked nearby and the driver said, "My wife told me that you're looking for a bath. Please come to our place." So we drove to their home, where the bath was already drawn and fresh towels set aside.

After a luxurious soak, I was about to leave when they said, "Why don't you stay for dinner? It's just a simple meal, but if you don't mind please join us." And then they treated me to the most amazing, multi-course meal made from vegetables from their garden, seafood that they received from local fishermen in trade for vegetables, and excellent, dry sake from a nearby sake brewery. Over dinner, they told me that Oga has less than 50 residents, down from a high of over 1,000, and that they, in their late 60s, are the youngest. They have promised city hall (the town was merged into a much larger city many years earlier) that they would stay until everybody else was gone and then they would "turn off the lights."

This photo is of Asano-san and his wife when I went to visit them on my second trip down the Sea of Japan coast. I interrupted their gardening. With access to so many abandoned plots of land, they can farm as many as they are able, allowing them to be largely self-sufficient in fruit and vegetables. 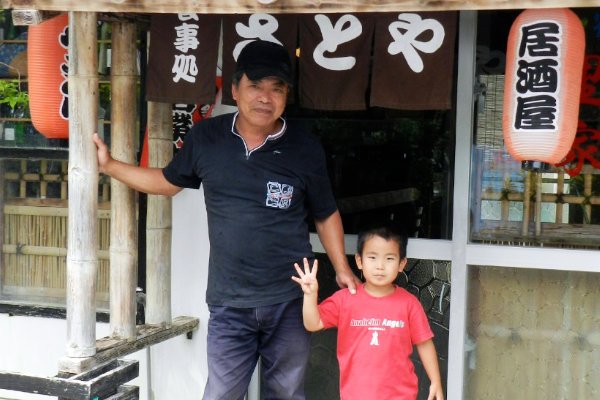 A Warm Welcome After a Tough Passage

In the second year of my Japan circumnavigation, I did a non-stop 5.5-day passage from the Goto Islands (off the west coast of Kyushu) to Yonaguni, a small island near Taiwan and Japan's westernmost point. It was a challenging passage, with my propeller being badly tangled by seaweed just a few hours after leaving, 40 knot winds and 3-4 meter seas, heavy rain, thick fog, hundreds of zig-zagging Chinese fishing boats, and many behemoth oil tankers and cargo ships.

Through the introduction of some Canadian friends who had visited Yonaguni a few years earlier, I had contacted Maehama-san and told him the day that I hoped to arrive, but it was of course impossible to know what time...or even if I would arrive that day. As I limped into the port with my tangled propeller barely giving me headway, the sky opened up and a torrential rainstorm hit, making it virtually impossible to even see the harbor walls much less pick out a good moorage spot. But then I spied a lone figure on the far side of the port, standing umbrella-less in the pouring rain. I didn’t know it was Maehama-san at the time, but I headed over to him and he caught my lines, which was especially helpful because the concrete wall was too high for me to climb up.

Maehama-san introduced himself and said he would come back later, after I had had a (badly needed) rest. That evening, he took me to his home, which he runs as a small inn/restaurant, to let me use the bath, and then he treated me to a delicious pork-noodle dinner (a local specialty) and lots of (very welcome) cold beer. The next day, he gave me a tour of the island, which is both wild and beautiful, forbidding and serene. I spent a few days on Yonaguni and enjoyed his company (and food!) immensely.

This photo is of Maehama-san and his grandson in front of the inn's restaurant. 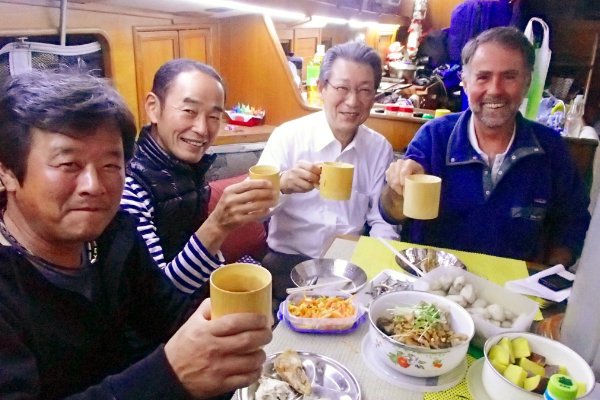 A Home Away from Home

Having fallen in love with exploring Japan by boat, but being frustrated by the lack of any information on how to make the most of this wonderful cruising ground, I decided to write a Japan cruising guide. So I set out to find a place to park myself and my boat for a couple of years to gather information and write the guide. After considering several regions of Japan, I settled on living on an island in the Seto Inland Sea because of its central location, hospitable climate, and low cost of living.

I wasn't sure, though, which island would be best, and there were hundreds to choose from. But one day my sailing buddy Sasa-san (see above) called and said, "I'm in Agenosho on Suo-Oshima ... it's a nice place ... why don't you come check it out?" Suo-Oshima is an island in the western Seto Inland Sea but, according to most sailors, there's no good place to moor there. But the always-adventurous Sasa-san said that he had found a spot big enough for both our boats. As it happened, I was just a day away, so off I went.

After arriving, Sasa-san and I got on our bicycles to explore the town (but not before leaving a sign on my boat with my telephone number in case I was moored in some place I shouldn't be). A few minutes later, my phone rang and the caller said that he was standing outside my boat, so I asked if he was calling because I should move my boat, but he said "No, but I guess you want to go to the hot spring, which is rather far away ... so would you like to use my car? I will leave it near your boat with the keys in it." Wow!

That evening, after a relaxing bath and while having dinner in the cockpit with Sasa-san, the man who lent us his car – Urakami-san – came to join us for a drink – and more drinks – and then drinking continued at his home – and then we were joined by the mayor. And then my one-night stay turned into a week...with much more drinking and eating...and then one night, after many rounds of sake, the mayor asked why I wasn't considering Suo-Oshima as my writing base. I replied that there was no place to moor my boat, so he said, "We'll build you your own dock." Which they did! And they also found a lovely ocean-view farmhouse for me to rent.

This photo is from a drinking-eating session on Silk Purse. From left to right, Onaga-san (vice chairman of the local fishing co-op), Ishida-san (who retired to Suo-Oshima from the big city), Shiiki-san (the mayor and an all-round great guy), and yours truly.

(Postscript: I did start living on the island and loved it – very friendly people, fresh air, beautiful ocean scenery, and much more. But then I met and married a woman who lives and works in Fukuoka. I commuted back-and-forth between the two places for almost three years but, very sadly, I finally had to give up my home in Suo-Oshima.)

In addition to the many special friends I made while cruising Japan, almost every day there was some memorable interaction – if only when taking a quick photograph – with Japan's warm and hospitable people. Here are a few typical highlights.

Contact us for information on how Konpira Consulting can help you experience the wonders of Japan's oceans.

The Wonders of Cruising Japan